The 23rd June 2022 saw our youngest ever demonstrator – Nathanael Griffiths who is just 18 years old.  Nathanael’s speciality is closed

segmented work.  Nice time would not allow him to go through the whole process, he had prepared a number of rings that were glued to a solid piece of wood for the base and then glued onto a sacrificial block attached to a face plate.

Nathanael gave a brief description on how he calculates the size of the segments required which involved deciding on the number of rings required (depends on the thickness of the segments.  The circumference of the bowl is then calculated using the formula 2πR. Dividing the circumference by the required number of segments will give the length of each segment.  After cutting the required number of segments, they are glued together to form 2 half circles.  When the halves are dry, the ends of each semicircle are sanded to ensure a good fit.  When the complete ring is assembled, a drum sander or a disc sander is used to flatten the discs which are then glued to gather to produce the outline of the required form.

By mounting the blank on a faceplate, the outside and the inside of the bowl can be turned without the need to remount the piece.  The glue tends to take the edge of the tools used.  Nathanael used a half inch bowl gouge to turn the outside of the bowl down to the glue lines between the discs.  A gentle touch is required near the top edge of the bowl to minimise vibration.  A push cut was used to remove the bulk of the material.  Nathanael prefers a scraper to produce the final finish.  Issues caused by vibration can be reduced for deeper vessels by limiting the number of rings turned at any one time.  Adding rings once the lower part of the vessel is complete, reduces vibration.

When the shape of the bowl was complete, it was saved from 80 grit, 120 grit and 240 grit.  There is no need to go finer because all the

sanding is with the grain.  Sanding sealer was applied and when dry, denied with Webrax and Cut’n’Polish which starts at 600 grit and as it is worked goes nearer 1000 grit.  The outside and inside of the bowl were worked separately to avoid having too much surface on the go at once.  When the paper towel was no longer discoloured, Microcrystaline wax was applied and buffed to produce the final finish.The bowl was parted off the glue block and the bowl mounted in a set of Cole jaws.  The base of the bowl was then finished, sanded and finish applied. 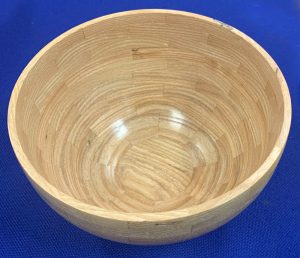 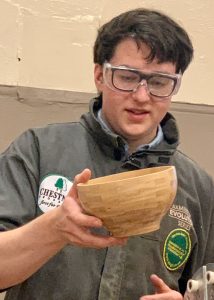 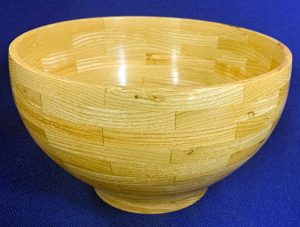 Following the break, Nathaneal worked on a Ash bowl blank, mounted on a face plate.  After making the outside edge

The demonstration concluded, members showed their appreciation for Nathanael in the usual way.