Chris was originally booked for the March 2020 but, as we are all well aware, COVID 19 suspended our activities, – we are just beginning to catch up.  Not that we ever will because the 2 years of Demos, shows, etc have been deleted from our history.

The theme for the evening was texture and colour for decoration – maybe it was worth waiting for 2 years as it gave Chris time to discover new methods and refine old ideas.

The first item of the evening aimed to show the rust / copper patination technique.  A radial patter was cut around the outer edge of a bowl with a sabretooth cutter.  A micro drive was used – Norman was volunteered to hold the drive unit whilst Chris

did the cutting.  A hollow dome shaped tool and a Pozi style screwdriver bit were used, with a hammer, to create small domes and screw shaped indents on the rim of the bowl.  The surface was then covered in black acrylic, before spraying with the reactor solution (double strength).  The bowl was then covered and set aside for the magic to happen.

The next piece began as a disk of Sycamore held on a screw chuck.  A curve was formed for the underside of the bowl and a spigot added to hold the blank in a chuck.  The curve was refined with a push cut around the shape before finishing with a sheer scraper.  The scraper was wide with a 90 degree point at the tip – each side of the tip being 45 degrees to the length of the tool.  The tool had a negative grind and was presented at a low angle with the cutting point at 45 degrees to the surface being cut.  A quick sanding finished the surface.

Decoration was added with the Sorby Spiralling and Texturing tool.  Chris remined us that the single bevel wheels are used for spirals whilst the double bevel cutter is used for texturing.  Various patterns were cut and outlined with a point tool to emphasise them.

The bowl was then reversed and an Arbortech mini carver was used to add two circles of texture to the face of the bowl.  With the lathe running between 200 and

300 revs, two bands of texture were produced, the outer band with the cutting disc vertical and the second band, using a coarser cutter with the cutter horizontal.  Any torn fibres were cleaned up with a stiff rotary nylon brush in a drill.  The centre of the bowl then had cut and polish applied to contract with the rim.  When working the surface, a clean part of the kitchen towel was used for each pull across the surface.

The bowl was then reversed and the foot removed.

Following the break, a rough turned bowl was held by a set of Axminster G jaws in expansion mode.  The foot was refined and the bowl reversed to make the required curve on the inside of the bowl.  Several coats of lacquer spray were applied, cutting back between coats.  The lacquer fill and tiny imperfections, leaving a glass like surface.

White acrylic paint was then applied to the surface, followed by “Spider Spray” to produce a black marble effect.  Finally, the rim was coated in blue acrylic, applied

The paint was highlighted by turning away some of it to highlight the marble effect on the rim.  The centre of the bowl was turned away, a spiral decoration was added to the centre and surrounded by a dot style pattern, created with the sharp point of a spiralling tool.  The decoration was then cleaned up with a nylon brush in a drill. 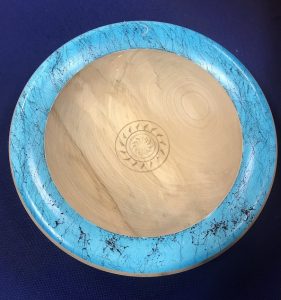 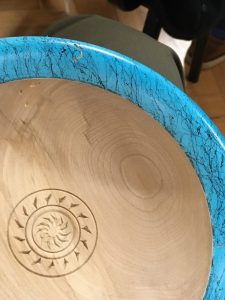 A new blank was mounted on the lathe and the edge was trued up.  A Dremel engraver was used to produce a texture around the blank between two lines.

Chestnut Rainbow waxes were used to colour the ring of texture.  A base coat of Aqua Blue was applied, ensuring it was worked into

the texture.  Apply in thin coats to ensure thin coats that will dry quickly.  A dry brushing of darker blue to
accent the high spots of the texture was then applied.  Finally some purple wax was applied to complete the effect.  The outer edges of the decorative band were cut back to highlight the texture. 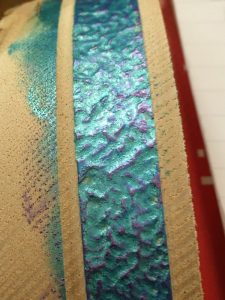 Finally, back to the first bowl to see how the rusting was developing and compare it to the example Chris had prepared earlier. 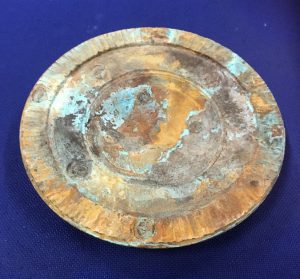 Following an impressive array of techniques displayed during the evening, the members expressed their appreciation in the usual manner.