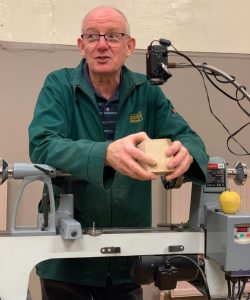 Myself with an Ash block and a completed apple

A club night was chosen for the November meeting, as we had a few new members join over the last year. Richie Southerton and I volunteered to do a small demonstration concentrating on the basics of turning.

I chose to be on first on and attempted to turn an apple.

I started with a 3” (75mm) square x 31/2” (90mm) long block of Welsh Ash. The centre had been marked out and a 5/32” (4mm)ø hole to fit a screw chuck had been drilled. With the block fitted to the screw chuck and the tail stock used for support and locked the block was rounded off with a roughing gouge. Using the roughing gouge was demonstrated i.e. letting the bevel of the gouge rub on the wood then slowly lift the handle to start the cut moving sideways to remove the wood.

I then went on to shape the apple using a 3/8” (10mm) bowl gouge as I like to use this tool but alternatively I could have used a 3/8” spindle gouge. When most of the top and some of the middle was completed it was sanded. 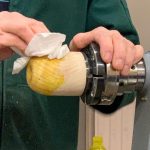 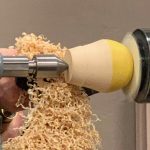 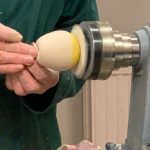 A 5/32” (4mm)ø hole was drilled were the core will be finally fitted. The block was then turned round and as the top was completed a cardboard disk was placed between the top and the screw chuck base to avoid damage.

The last turning stage was to complete the bottom using the same method as the top. The apple was then removed from the chuck and a coat of yellow spirit stain was applied, before completely dry a small area on the side was given a coat of orange spirit stain.Finally a twig stork was glued in the top and a clove treated with super glue to stop it crumbling was glued to the base (See below). 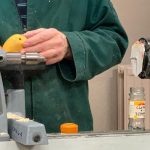 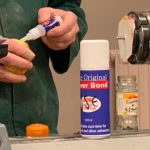 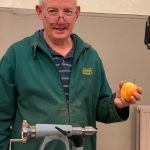 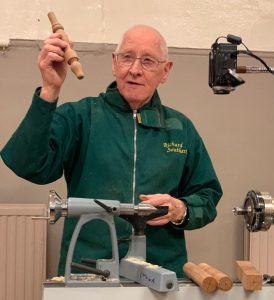 Richie explaining what he is going to turn

Richie Southerton was next to show how he makes legs for a child’s stool.

As there were four legs needed one was shown completed along with a technical detail drawing of the leg. Then a piece of sapele 1 1/2” (38mm) square x 12” (305mm) long was placed between centres. This was rounded off using a roughing out gouge. A marking out template or jig was used to mark out all the tops and bottoms of the coves beads and shoulders etc.

With the first leg completed the other two remaining legs were turned the same way. 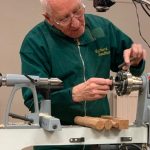 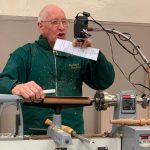 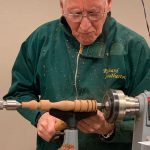 On completion all four legs were presented to Rachel a long standing member and friend for her to complete the stool. Below are The completed legs and my apple 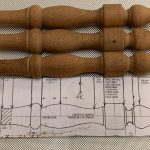 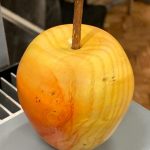