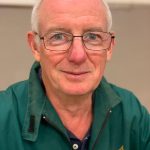 Our Chairman, Peter Green, kindly stepped into the void created by our booked speaker having to cancel for September’s monthly meeting. 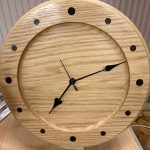 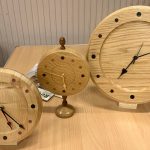 Peter gave a splendid demonstration and produced a very interesting wall clock.  Materials were a 12″ disc of dark walnut, a small piece of boxwood to be diced for the numbers and the clock mechanism with batteries and clock hands. 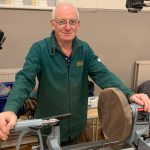 A piece of plywood was attached to one face of the walnut by traditional paper and PVC method. 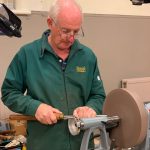 The rim and face were trued using a 3/8th fingernail profile bowl gouge. 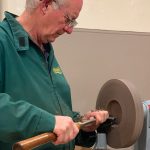 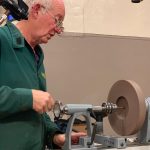 A central area was turned away to match the chuck in expansion mode and a 5/16″ (7mm) hole drilled in the true centre. The thickness of the rim was divided by 3 and bevelled. 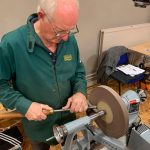 The work was now reversed and mounted on the chuck using the jaws into the aperture. The face was now trued and a matching bevel made on the rim. 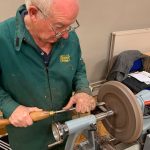 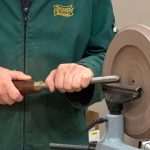 The position of the clockface numbers was decided and marked by a pencil ring. The center was now dished to an appropriate depth for the clock hands to circulate freely. 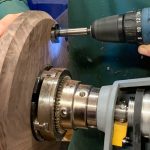 The top of the work piece was decided by the grain of the wood and a hanger attached on the rear. 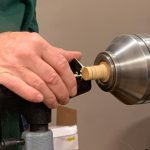 Boxwood disc markers of the correct depth were turned in order to create the 5 minute positions on the clockface. 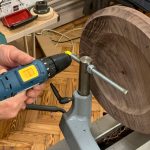 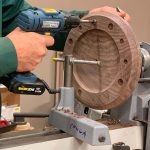 The 12 positions of the numbers were marked and a fine drill hole (3/32″ – 2mm) was made to position the forstner bit which was used to drill 4mm deep recesses to receive the boxwood discs. 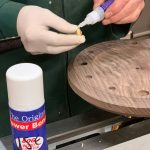 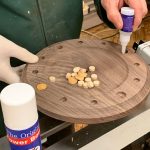 PVA is normally used to fix these discs (which protrude 0.5mm), though due to this being a demonstration quick drying super glue was used. 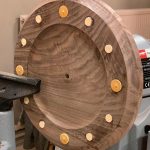 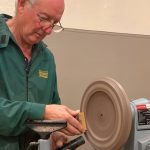 This area was turned and then sanded carefully flush, using appropriate grades of sandpaper, and then polished with an oil and wax preparation. 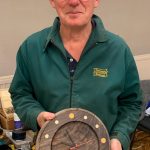 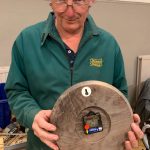 It only took a moment then to install the clockwork mechanism and hands, and Peter proudly showed off the finished product.

The detailed presentation took the members through all the stages of this project, and it was refreshing to see the greater audience participation, with a combination of light-hearted banter and helpful personal experiences. Peter should be congratulated for showing leadership and stepping into the void. We’re sure there is a great deal of preparation involved in producing a demonstration.

The club thanked Peter and we felt confident he deserved to sample a well deserved glass of the wine he won in the raffle!