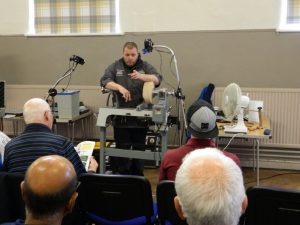 Chris explaining what he was going to attempt from the vision in his head.

April’s meeting welcomed back from last year, the lad from Salford, Chris Fisher (The Blind Turner). Being blind Chris had a vision in his head of what he intended to make. A bowl textured below and on the rim but this time he was going to have a go at colouring as well. To start with he got out his newly acquired toy  ” A talking tape rule”. Well that really surprised me but when you are blind and using a lathe you need all the help you can get.

As the piece of sycamore had been pre-assembled to a face plate ring, it was then mounted on the lathe chuck. A template made from perspex with the centre removed, the correct size for a chuck tenon was used to scribe a circle using dividers. The tenon was then cut and after sanding Chris’s signature textured marks were cut in the base. 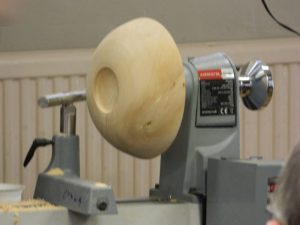 The bowl base was now turned but the blank had a bit of a defect.  As all experienced turners know cracks can be turned out or in some cases a bit will fly off. Chris did warn members in the front row if a piece comes towards them to ‘Duck’!  So gentle cuts were made and a single curve took the defect out.

The next stage was to lock the spindle and start the power carving. Chris said that if there is anybody in the audience from an engineering background they might be upset, but tough this is what he does. Explaining that there is no marking out whatsoever it’s all just random, he just gets the power grinder out and goes for it. So that is exactly what he did, just moving the blank round to a suitable position then from the centre carving out towards the rim. 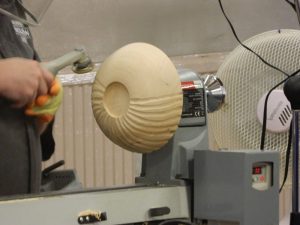 The blank being randomly carved.

With the carving now complete it was on to cleaning it up. Chris’s choice was a bristle brush held in the power carver.  His choice is a Nick Agar- King Arthur. After the sanding was completed it was now time for the colour. Being blind is one thing when turning but colouring is another ball game. Chris explained that he just has to rely on other people’s feedback. So with his finger placed inside  the spray gun bowl rim, a very dark purple stain by Hampshire Sheen, was poured in until he felt it touch his finger. With the speed on slow and starting in the centre spraying was worked towards the rim. An audible sound was heard to tell Chris that he had reached the edge of the rim then he could work back towards the centre. 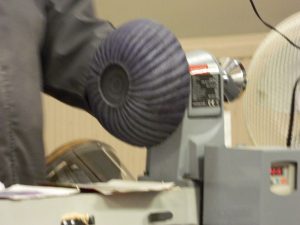 The bowl base coloured.

To complete the base Hampshire Sheen Silver Dry Brushing was applied then a coat of gold. With the bowl removed from the faceplate ring and the chuck jaws cleaned of all dust the bowl was reattached and  making sure that the bowl was running true the face was cut.

During the tea break I heard Chris talking to Vish, one of our members. He asked him what the bowl base looked like to him and Vish told him it looked like shiny old pewter –  “that’s exactly what I wanted” he said. 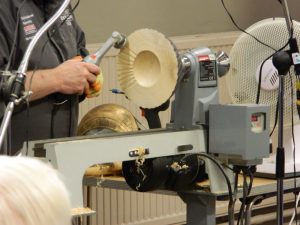 The bowl centre and rim cut.

After the break the bowl centre was hollowed out. Then the rim completed as the base i.e. carved, stained then brush waxed. So the top and the base both matched. Lastly the bowl centre was turned to the correct depth. A jig that rested on the lathe bed and a sliding bar that detected how much material was needed to be removed was used. On completion all that needed to be done now was to sand the inside then apply a coat of beeswax and lemon oil. After sanding sealer was applied very fine Yorkshire Grit was applied then lastly a coat of friction polish. 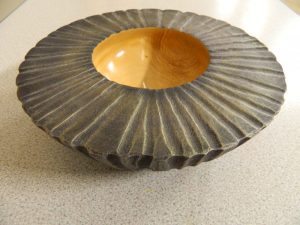 This completed a very enjoyable and much appreciated demonstration. Our thanks not only go out to Chris but also Nicola his wife and driver and not forgetting Bamber. (Chris’s guide dog)

Below are more pictures from Chris’s demo 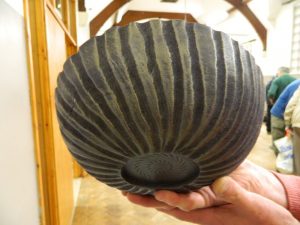 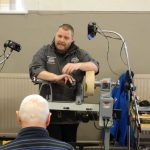 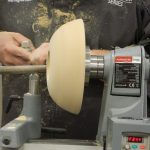 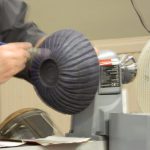 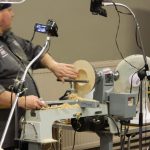 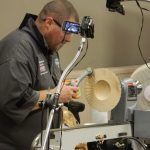 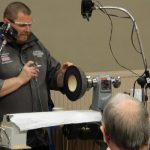 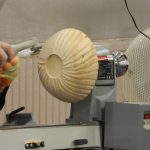