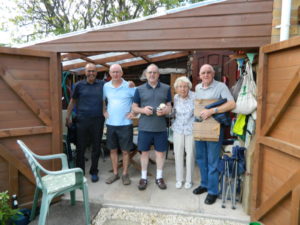 Some of the members that turned up. From left to right: Vish, myself, Peter, Rachel and Richie.

Having taken over as Chairman this year I asked the question: Why is it that we do not have a meeting in August?  Well the reason is it is holiday season, but as probably over 90% of the club members are retired it’s holiday season twelve months a year!

So at one committee meeting I suggested we have a get together based around the woodturning workshop. As we passed ideas around we came up with the format of just opening up a member’s workshop to share new and old ideas of workshop layouts.  As the idea was mine it was suggested, and rightly so, that I should be the guinea pig.

As this was a first event there was no format to follow and as weeks passed reality dawned that a plan was needed.  Preparation, what was going to be shown and what was the agenda. Firstly I decided on the time i.e. 10am to 4pm – that would encourage some to come in the morning and some to come after lunch. I started advertising at meetings three months prior to August.

As August came, a few jobs needed finishing off and a slot was designated to do a bit of tidying up. It’s amazing what turns up when a good clean up is completed. So the day finally came and with tea and coffee, chocolate cake and scones (freshly baked kindly by my wife, Judith) and biscuits ready visitors started to arrive. The weather was kind to us. A good day of woodturning chat and light hearted discussions was enjoyed by those who came along.

So my thanks to the  members in the photo and to Paul and Margaret, Peter (M), Nigel and Howard (sorry not on photo) for making it a very successful day. I hope we will be able to repeat this again next year.