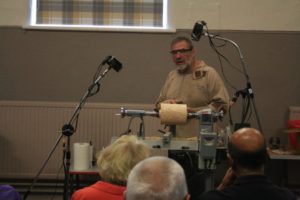 Les at the start of his demo.

Les Symmonds, a local turner, in fact the only professionally registered woodturner in Snowdonia National Park came to do July’s demonstration. Les chose to turn an hollow form vase without the use of hollowing tools.

He showed a variety of his turning that incorporated the use of a disguised joint. The joint was a simple notched or halfed type similar to the one used on a box lid. Les explained that he would be using a piece of green ash and the method he would be using to complete the turning. 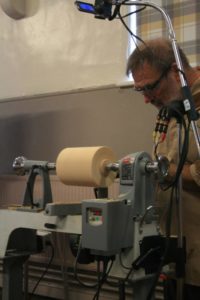 Firstly Les rounded off the blank and turned chuck spigots on both ends. As the blank was still in one piece some of the outside roughing out was then started.

Depending on what was to be turned, a cut line had to be made, this being on the flattest part of the object.

Parting off between centres can be a dangerous practice so the precautions were explained i.e. parting to a depth that you feel safe with then get out your saw and cut it through. 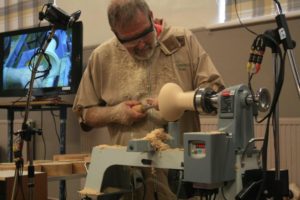 The top was first to be hollowed out using a bowl gouge then a carbon tipped tool. Half of the notched joint was then cut and the inside sanded. Finally measurements were taken and transferred to a plan with an explanation of why these were taken. That being once the vessel was assembled the turner would find it difficult to get inside to find the thickness. This was placed on one side to be used later. 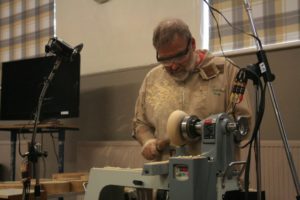 Turning the base section

After a short break the base was turned and as this was relatively shallow just a bowl gouge was used. The second half of the joint was cut and as it was a push fit, caution was taken by stopping and starting the lathe taking  small cuts.

The two halves were glued together but as a good cure time for the glue was twenty four hours an identical turning was used. Les did explain that it was actually from the same log. All that needed now was the outside to be turned and sanded.

Going back to taking the measurements on the top half, this was used so he didn’t turn it too thin with dire consequences. All that was required was to break through the top of the neck and the vase was complete.

Much appreciation was given to Les at the end of the evening.

Below more shots of Les’s Demo. 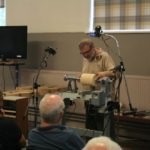 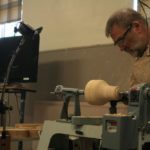 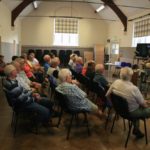 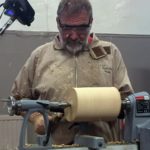 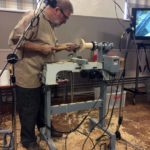 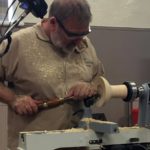 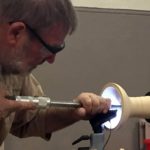 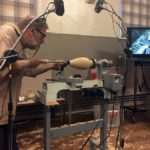