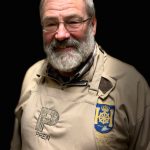 Les returned once again and this time his demonstration concentrated on scorching. So what exactly is scorching, basically it is burning the surface of a turned object with a blow lamp along the grain. Trees grow slowly in autumn and winter producing hard wood then accelerate in spring and summer producing soft wood. When burnt the soft wood burns faster than the hard wood producing hills and troughs on the surface.

Les told us a story about when he was in his shop one day. A blind woman and her husband walked in and the husband started describing the scorched items Les had for sale. As she felt the object she said to her husband

“I now know what the term grain in wood is all about”. 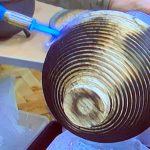 To start Les mounted a large piece of spalted beech on the lathe after turning a chucking tenon. Then using a bowl gouge shaped a bowl base. Then decorated it with a beading tool after giving a short description of how use it. It was now ready for scorching. This was done after a protective mat was laid on the lathe bed for protection. Turning the lathe by hand it was slowly turned to get an even burn. When happy with an even burn it was cleaned with a tungsten brush, then cleaned again with a suede cleaning brush with the power on. 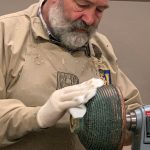 The next stage was to apply the verdigris (green ageing) wax, applying it with a cloth then working it into the bottom of the grooves with an old toothbrush. The lathe was then switched on and with a wire brush used to remove the excess wax and finally polished with a paper towel. To complete the waxing the lathe was stopped then Chestnut copper gilt cream was applied all around the rim. Then a patch applied to one side and worked towards the bottom and finally polished with a paper towel. This completed the first demonstration.

An ash blank was used for the 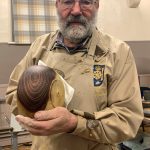 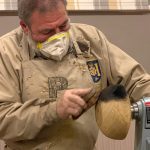 next demonstration ,this was turned the same as the first but tulip shaped and left smooth. Due to time restrictions only a small  portion of the bowl blank was scorched. As ash has a very strong grain brushing was done following the grain pattern. Waxing was completed using Chestnut silver gilt cream as seen on the right.

The final part was basically the same as the first two but this time Laburnum wood was chosen. Les explained that different scorched woods take different gilt creams in appearance, so a bit of experimenting needs to be done. As Les is relatively local and comes back each year he seems to pull a very different demonstration out of the bag. This one was very much appreciated with a big round of applause

Below are some of the turned and scorched items Les brought in . 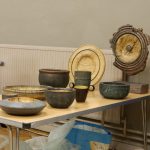 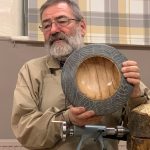 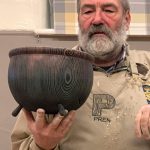 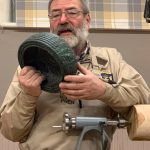 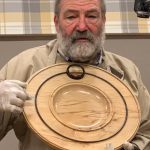 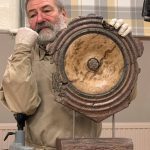 Below are more pictures of Les’s demonstration. 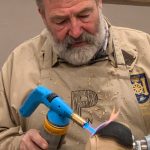 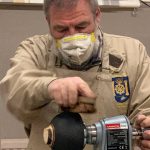 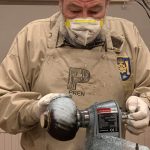 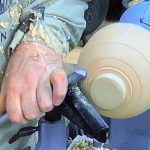 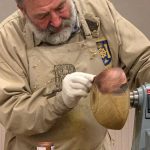 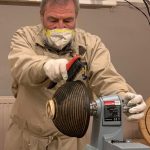 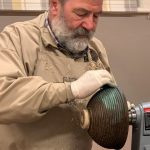 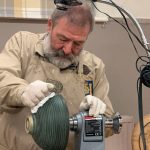