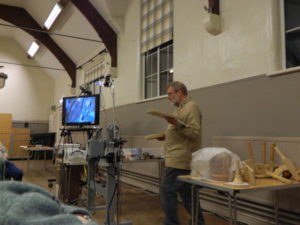 Les at the start of the meeting with a selection of his jigs.

Les Symonds returned for the first demonstration of 2019. As Les was a bit conscious about returning in less than a year he focused on something different. That being jigs, fixtures and simple aides to help ease turning and production.

As Les sells small three legged stools from his shop in Bala, North Wales, he showed a holding and drilling jig. This jig marked out the three holes then held the stool base on the pillar drill for drilling holes for the legs. This jig could be set for 10° or 12° which ever angle is to your liking. The little stools can be for infants,. Christening presents, teddy bears or dolls. 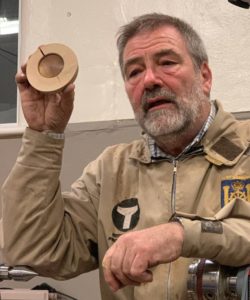 Les with the scarf disc jig

Les had chosen to turn a scarf disc and pin.  The disc had to be curved on both sides, then a hole cut to one side of centre then chamfered on both sides. A jig was the easiest way to hold it. Les started with a piece of wood approx 100mm (4″) dia. rounding it then facing it flat. A hole 70mm (2 3/4″) was then cut right through then a recess for the outside of the disc was cut for holding. This was then turned 180° and a 10mm (3/8″) packer inserted under any jaw of the chuck. Then finally cutting  a chucking tennon for your particular jaws and then band sawing it in two.

For turning the scarf disc a piece of Afromosa was placed in the chuck and  then the end turned with a slight curve. The back was turned with a curve but not parted off until both sides were sanded and sealed. 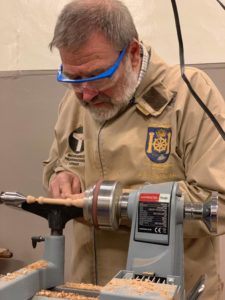 It was now time to place the disc in the jig paying attention to where the hole centre is to be cut. That being patterns in the wood and also grain orientation so that the best is selected. Now the hole is cut, this is determined by the thickness of the scarf material. The thicker the material the larger the hole. Les cut a straight chamfer then sanded and sealed then polished. This procedure is now repeated for the other side but it is critical to get the orientation correct to ensure the chamfers line up.

After a short break Les produced a jig for drilling holes so feet can be positioned on a turned bowl. Three holes were drilled as this makes the bowl self leveling.

Les then went back to complete the turning. A pen blank or similar was positioned, rounded off and then a chucking spigot turned. After placing in the chuck a ball was shaped a short distance from the end then the pin was cut tapering down away from the ball. Finally sanding, sealing and polishing then parting off. 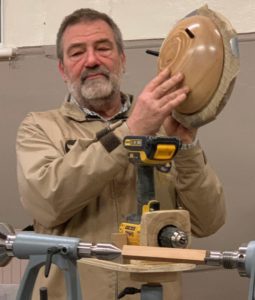 Les with the jig and the three legged bowl

Les then gave a short talk on the Beaker people who lived in Britain about 5,000 years ago. The reason they are called the Beaker people is that they leave a beaker shaped vase in their graves. The degree of decoration varies on different pots. Les has written an article for the Woodturning Magazine but not yet published. So for copyright reasons no photo can be shown. Only to say that it has about 12 to 15,000 spots on it and will be published soon. To mark out the spots a simple table type marking out jig was shown and demonstrated.

Lastly Les talked about an article that he had written for the Woodturning Magazine on a copper bound oak vessel. He explained how he sourced the old oak from a recently renovated building and utilised it to make this vessel. The vessel, as can be seen on the  right, when turned had several cracks. To bind and make the vessel aesthetically pleasing, two copper wire bands are wound round it. To ease binding the wire round the completed turning, a wire feeding jig was shown and demonstrated. More about the article can be seen in the past copy of  Woodturning magazine (Winter 2018). That completed the demonstration and much appreciation was shown we hope to see Les again soon.

Below are more pictures from Les’s demonstration. 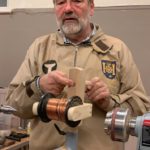 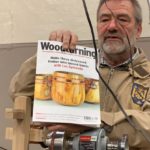 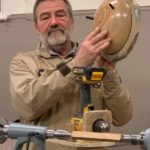 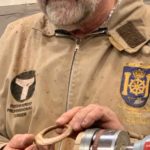 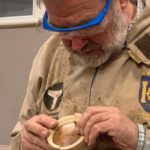 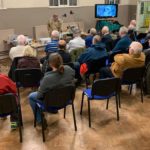 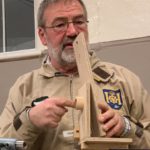 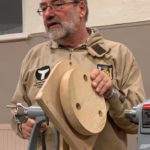 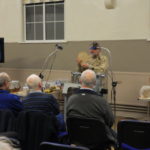