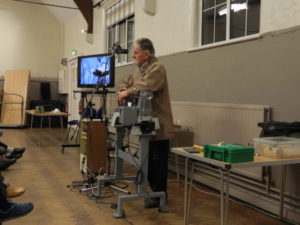 Stuart explaining his demo at the start of the evening

For the second month running we had another long standing member of the club, Stuart Thomas to do this month’s demonstration.

Stuart decided that as the club has welcomed quite a few new members  that it would be helpful to get ‘back to basics’.

So to start he began rounding off a sample of wood with (what most people consider the hardest tool to use) a skew chisel. As Stuart is an avid spindle turner he could not emphasize enough that with a lot of practice once you have mastered the skew there is no better turning tool to use. The finish you can achieve once mastered is second to none even when used to rough out. That said for people new to turning the easiest way is the roughing out gouge, so a quick demonstration was given. Then it was back to the skew to show how to make v cuts and using this principle on end grain especially on pummels how a clean cut can be made. 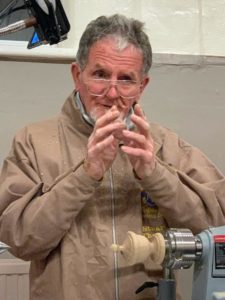 To carry on with spindle turning Stuart used a spindle gouge. This was used to demonstrate cutting coves and beads. He then explained that he would use a skew chisel to cut beads but for obvious reasons the skew could not be used to cut coves. Now that the basics had been explained Stuart went on to put all these cuts into practice.

The first to be turned was a finial. The use of a blocking out copy template was shown. This is used if producing a batch of items and explained this would not only speed up the production but also make them more uniform.

A 9″ x 2 1/2″ dia. bud vase was then made from ash. This made use of the beading and coves previously shown.  Finally reverse chucking was shown as to complete the the base. 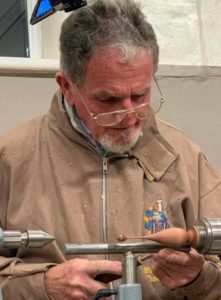 Stuart turning the bottom section of the ornament

Stuart completed his demonstration showing how to make a Sputnik sea urchin ornament. This was made from a sea urchin shell and three turned items. This can be seen in detail in the Winter 2018 issue 326 edition of Woodturning magazine page 61.

This completed Stuart’s demonstration and much appreciation was shown. I know of at least one member of the club who has put in an order for some sea urchins.

Below are more pictures from Stuarts demonstration 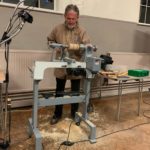 The start of the demo 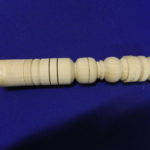 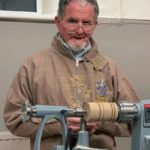 Blocking out the turning 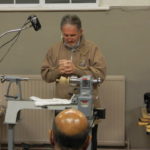 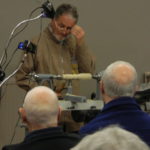 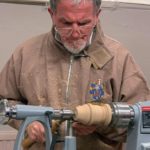 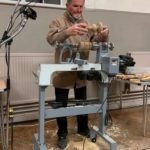 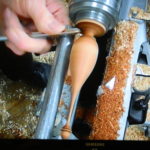