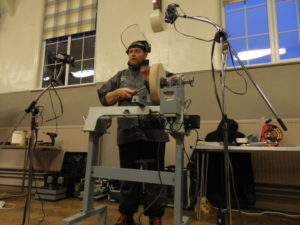 Chris at the start of his demonstration

For the first time at the club, this month’s demonstrator was Chris Fisher the Blind Woodturner. To put a piece of wood 12″ dia. x 3″ in a lathe spinning fast and holding a chisel against it seems crazy. But if you are blind it just seems incomprehensible. That said it is is just what Chris Fisher did. After a brief introduction Chris explained that ten years ago after a virus he went completely blind. With no experience of woodturning whatsoever he decided it was the career for him.

Chris had decided to turn a textured and coloured bowl.  After mounting a blank on the lathe the blank was trued up on the side and face. A recess for mounting on a chuck was also needed. No good putting a pencil mark on the wood! Chris brought out a plastic container lid with a small hole in it to mount on the tailstock centre. A scribe line was made and cut giving the size of the chuck mounting. Then the outside was shaped and finished using power sanding and sanding wax to keep the dust down and polished to a high sheen. 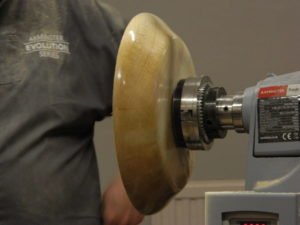 The bowl base completed and mounted in the chuck.

Removing the screws attaching the blank to the faceplate went well until a screw fell on the floor. Concerned Chris would slip on it I jumped up and placed it and told him it’s in your back pocket. His reply was ” hey cheeky we will have less of that “. Laughing I could not believe I had fallen for that  old gag! The bowl body was placed in the chuck and the face and centre cut to the required depth. A handmade depth gauge was displayed that aided Chris to reach the desired depth as to not break through the bottom. Cleaned up and sanded it was now that some colour was added. It was amazing that Chris kept the colour to just the centre.

Chris gave a small discussion about how the blindness had affected him mentioning dreams and depression. Then the help that was given to him to deal with his situation. The guide dog assessment that was a two way bonding before being allocated his Alsatian dog Bamber. He gave thanks to all the support he had received and a special thanks to his wife of one week Nicola who has supported him and drives him around to do his demonstrations. Also the sponsorship he had received from Axminster Tooling helping him to get on his way with woodturning. 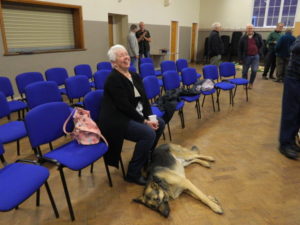 Nicola and Chris’s guide dog Bamber having a well deserved rest before the start.

The last part was given to texturing the bowl. This was performed using a Proxon Power carver with a sabre tooth blade. Finally hand sanded to the required finish and oiled.

The demonstration came to a close with a great round of applause. Chris’s attitude to life is a great inspiration to sighted and non sighted people. How he has come to terms with his situation and become a woodturner is beyond comprehension to a lot of people. 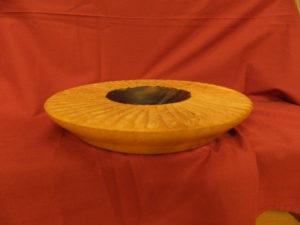 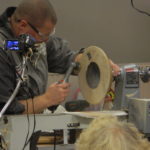 Some More pictures of Chris’s Demonstration. 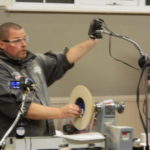 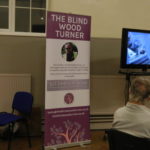 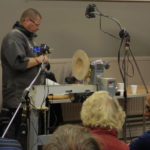 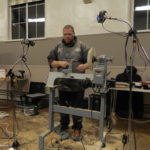 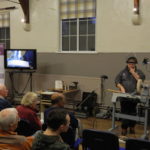 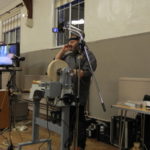