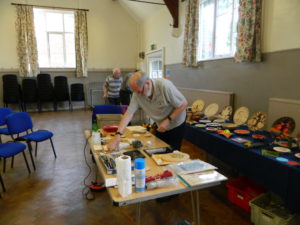 Bob getting ready for the demo.

Bob’s demo in June or I should really say masterclass was divided into two sections. The first was a demonstration and the second was hands on for willing members who wanted to have a go with Bob overseeing.

Bob started with wood selection, what wood is not suitable (open grain e.g.oak and ash) and the ones he prefers. That being sycamore but maple could also be used. He then went on to show all the different objects that could be used. As Bob brought many platters he suggested he go through the various stages until the completion. 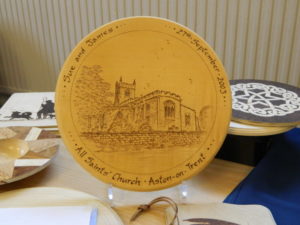 Suggestions for designs and where they can be sourced. Bob had brought in a variety of books but also suggested that the internet was also a good source. He then went on to describe the different ways to copy them with the different materials used. i.e. stencil or transfer paper. Lastly the equipment used and the various types of machines. The disadvantages of certain ones over the advantages of others.

A small demonstration of how to use the machine and burning elements used was given with tips on how it is achieved. As shown on the commissioned plate your work can now be left plain with just a coat of sealer or lacquer. But if colour is required as below there are many different options available.

There are various stains and paints including spray and brush on, also colour brush fibre tipped pens.These various options are readily available on the market. Your item like the uncoloured one again can be sealed  with sealer or lacquer. 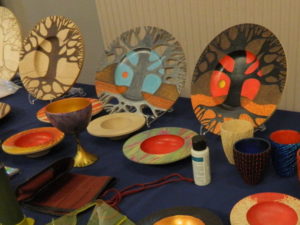 The second part of the evening was a hands on. Bob had brought many pyrography machines, more than enough for the volunteers to have a go at. With a bit of reluctance a few of the members decided to have a go. To give people a chance (some for the first time ) Bob had printed out a variety of boards to have a go at. After some of the members had given it a go it was concluded that it was a very informative and enjoyable meeting.

Below is some of Bob’s work and equipment he brought. 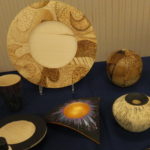 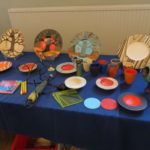 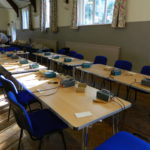 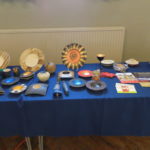 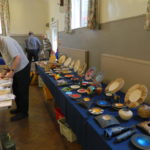