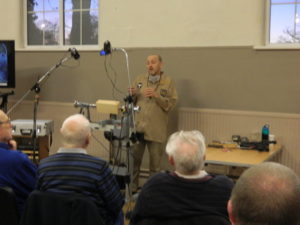 Steve introducing himself and explaining what he was going to turn.

For our March meeting we welcomed back Steve Healey. His intention was to  make a vase out of a piece of relatively plain redwood into something of beauty. To start a piece measuring 27cm (10″) X 11cm (4 1/4″) X 7 1/2 cm (3″)  was placed between centres.

Steve explained that the wood was going to be turned at a relatively high speed.  A good 5 point safety check list is recommended not only for this turning but for all your turnings. Firstly the tailstock is pushed up and locked, the spindle is wound in and locked, that the banjo is in the right position and locked, the tool rest is at the correct height and locked and finally spin the wood to make sure there are no catches. 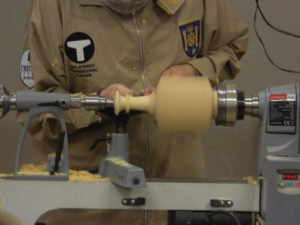 Steve started the turning by cutting the pommels that determined the height of the vase body. On one end a spigot the diameter of the chuck used was then turned then removed and placed in the chuck. A final skim of the pommels was taken with the tail stock for support. Then with a spindle gouge the neck was turned cutting fillets, coves and beads. With the tailstock removed a 10mm (3/8″) Ø drill held in a hand drill was used to drill down the neck. Then the lip of the vase was completed.

The next stage was to lock the chuck so that the base with square sides could be textured. This was completed with a Texas Power Tool with a rotary cutter on all four sides. The base was then ebonised using Chestnut ebonizing lacquer then the whole vase was sealed using Chestnut sanding sealer. 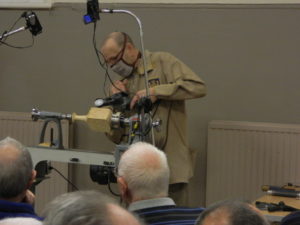 After a short tea break to let the sealer dry the vase body was sanded. This was done on all the edges of the body then on all four sides. This brought out the white of the wood against the black texturing. It was also explained that the black ebonising lacquer could be put on first then textured but Steve said of the two options he prefered his way.

It was now time to turn a jam chuck after the vase was removed from the chuck. After completing the chuck to fit the neck of the vase the base had to be cleaned up. With the tailstock for support the majority of the surplus base was removed. Steve then lowered the speed then carefully removed the remaining pip to leave a smooth base. This was then sanded and sealed. As the blank had three holes previously drilled on the front of the blank two box wood buttons were fitted. The third button was then turned, sanded, sealed and fitted, this completed the vase. 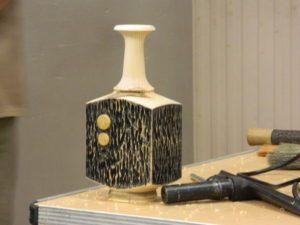 The near completed vase.

As there was a short amount of time left before the close of the meeting Steve demonstrated how he would go about turning the outside of an acorn box. Holding the 2″ x 2″ blank the ends were shaped using a skew chisel. Then the end that holds the acorn was textured using a rotary wheel texturing tool. It was then demonstrated that the tool could be altered to form various different patterns. This then completed Steve’s demonstration and very enjoyable it was and much appreciation was shown.

Below are more pictures of Steve’s work and demonstration 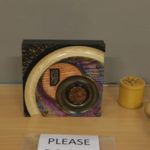 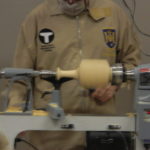 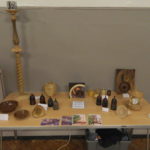 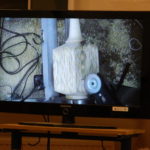 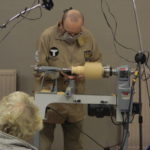 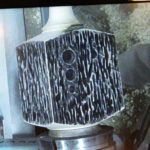 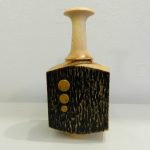