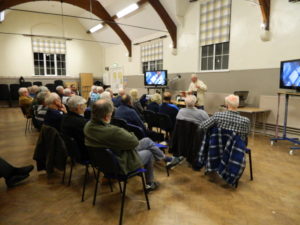 After an absence of three years from demonstrating we welcomed back, Peter Morgan, a long standing member of our club to do this month’s demonstration.  At the August “Open Shed Event” Peter said that at the September meeting he would bring a small present for my wife as a thank you for the cake he had enjoyed. The only stipulation was to tell him how I thought he had fitted the head to the body? So at the start of this month’s demonstration I showed him three versions (none were right). So I will just have to teach you was his reply but this time it is going to be an owl.

The owl’s body was first to be turned from beech wood turned round to 3″ Ø with spigot. This was placed in a chuck with a hole 1″ deep drilled in the end. The body including the shoulders were now shaped and sanded. This now completed was put to one side.

Peter now explained about how the head had to be a perfectly shaped round. If not this would simply not work. A homemade spherical turning jig was shown although old had cost Peter the princely sum of 50 pence. That was for the cutter with the rest of the parts made from scrap material. Another  piece of beech was turned to 3″ Ø then the ball cutting jig was used to shape the head. 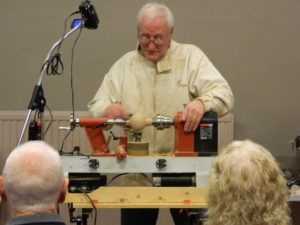 To complete the head another home made jig was used.This held the head so the spigot could be turned off. Then a hole drilled and the eye positions marked. As the completed owl had to be stained brown, dried and lacquered, time could not be spent on this so a duplicate body and head was used. With the stained head held in the jig and with the first eye position centred this was now cut and sanded. This was repeated for the second eye socket.

The head swivelling mechanism was now turned that being a pin and sleeve. On completion this was glued into the head then the body. With the eye sockets and nose glued on the owl was now complete.The head could now rotate 360° 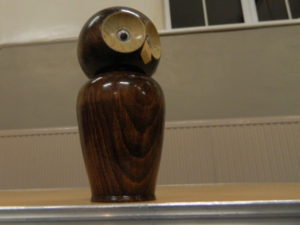 With some time remaining for the evening Peter told us about how a good friend, a former club member sadly no longer with us, asked him to make some honey dippers for him. On more than one occasion these were made. Only to find out years later that he had been selling them to a local cafe. So in his memory he quickly showed us all how he made them. Firstly marking it out with a template. Then turning it complete. 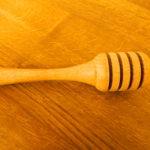 This completed a very good night’s turning demonstration and much appreciation was shown. We just hope Peter doesn’t leave it another three years before he does another demonstration!

Below are more pictures of the owl and honey dipper being made. 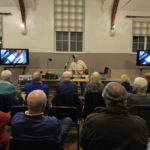 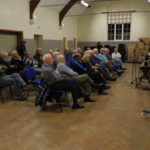 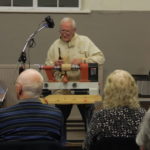 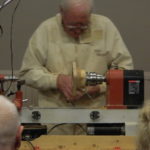 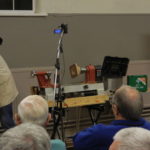 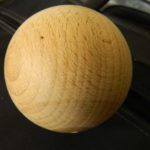 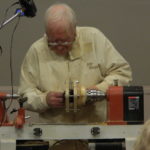 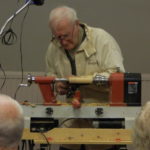 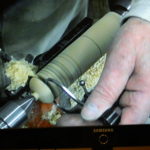 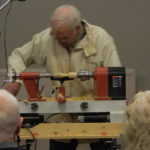 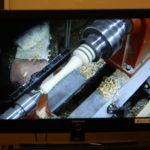